Best Places To Visit In India

What are the best Places To Visit In India? Many times, it depends on personal preferences. However, some places to visit in India remain perpetually more popular than others. These are among the best destinations in India. Want to learn more about India’s main destinations? Check out this travel planner in India and this guide to India’s main tourist spots by region. If you wish to explore beyond the famous tourist attractions of India, here are 12 of the best places to visit in India off the beaten track to inspire you!

Jaipur a place to visit in India 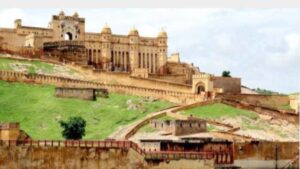 Jaipur is a vibrant fusion of old and new. Also called the pink city, the capital of the royal state of Rajasthan. Jaipur was ruled by the Rajput kingdoms for many centuries and developed as a planned city in the 17th century AD Together with Delhi and Agra, Jaipur forms the Golden Triangle, one of the most famous tourist circuits in the country.
Jaipur, the pink city manages to successfully preserve its old-world charm .. Home to some UNESCO world heritage sites including Amer Fort and Jantar Mantar, Jaipur is home to many magnificent forts, palaces, temples and museums .. Jaipur is full full of lively local bazaars where you can buy local handicrafts and costume jewelery at your leisure. Popular bazaars in the city include Bapu Bazaar, Tripolia Bazaar and Johri Bazaar. Jaipur is also very well known for its local food and the most famous dishes include Ghewar, Pyaaz Kachori and Dal Baati Churma.

Varanasi one of the best places to visit in India 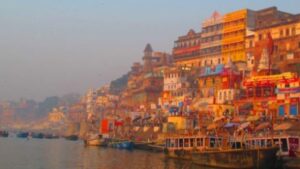 The oldest living city in the world, Varanasi enchants and surprises its visitors in the same breath. Also known as Kashi (city of life) and Benaras, this spiritual capital of India is one of the seven holy cities of Hinduism. The old city of Varanasi is located along the western banks of the Ganges, scattered in a maze of alleys called galis that are too narrow for traffic to pass – be prepared to walk and meet some holy cows !.

There are temples in almost every corner of Varanasi, but the Kashi Vishwanath Temple is the most visited and the oldest on the lot (Benaras is known as the city of Lord Shiva for a reason, and rightly so).
Varanasi is considered a propitious place to die, as it is believed to guarantee moksha or liberation from the cycle of life and death. Spiritually enlightening and extraordinarily photogenic, the heart of the city pulsates around the ghats, about 80 of which border the Ganges – prepare yourself for the sights, sounds, and smells!

All the chaos and noise on the ghats stop when the Ganga Aarti takes place after sunset, a ceremony of immense greatness. This divine city is also an important destination for Buddhists. Gautama Buddha delivered his first sermon in Banaras, a part that is now in Sarnath. Typical of any Indian city, This city can be visited along with golden triangle with Varanasi which is one of the most famous tours in India.

Udaipur, the best place in India for lake lovers 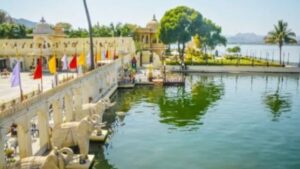 The city of Udaipur is situated at 598 meters above sea level in the southern part of the Indian state, Rajasthan. It has an area of ​​37 square kilometers. it is located on the southern slope of the mighty Aravalli hills that separates the city from the Thar desert. Northern Udaipur includes highlands while the eastern side of the city has vast fertile plains. The southern part of this beautiful city is formed by rocks, hills, and forests.
An idyllic place for romantics in the heart, Udaipur is, without doubt, the best vacation spot in Rajasthan. Decorated with pretty buildings and sparkling lakes, this famous tourist spot is part of most of the tour packages in India and has much to offer to honeymoon couples and history lovers. The city is also home to the second-largest artificial freshwater lake and has one of the most exotic boutique hotels in India. A perfect destination for a honeymoon tour, a family vacation and a vacation with friends, 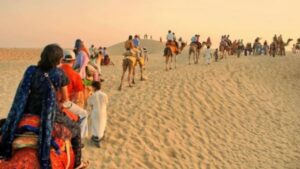 If geology interests you, then Jaisalmer is where you have to travel. The Wood Fossil Park or Aakal is located about 15 kilometers from the city. Here, one can discover and trace geological tragedies that occurred in the Thar desert 180 million years ago. The city of Jaisalmer also acts as a guard at the border of western Rajasthan (and India).

This “golden city” is located near the border with Pakistan and near the Thar desert. The most important landmark of the city is the Jaisalmer Fort, also called Sonar Qila (Golden Fortress). Unlike most of the other forts in India, Jaisalmer Fort is not just a tourist attraction. It houses shops, hotels and ancient havelis (houses) where generations continue to live.

Jaisalmer dates back to the 12th century. The story goes that Rawal Jaisal, the greatest heir of the Rawal of Deoraj, was transferred to the throne of Lodurva and a younger half-brother was crowned king. Rawal Jaisal went in search of a new home to found his capital when he met the essay Eesul. The sage told him about Krishna’s prophecy that a descendant of his Yaduvanshi clan would find a new kingdom in the same place. It was in 1156 that Rawal Jaisal built a mud fort, called him Jaisalmer as himself, and declared his capital.

Do you want to create a dream vacation? Welcome to the wonderful tourist city of the Taj Mahal – Agra, India. The seat of the great Mughal rulers for centuries Agra, India offers its treasure to all tourists from India and abroad. Although Agra, India is synonymous with Taj, the city bears witness to the vast amount of architectural activity of the Mughals.

Taj Mahal is undoubtedly one of the best places to visit in India and the epitome of love, poetry in white marble, one of the seven wonders of the world as well as being the pride of India. In fact, all the monuments of Agra, in India, have contributed to the tourism of Agra. Our fantastic Agra packages will soon guarantee you planning your Agra trip. From Delhi to Agra to Jaipur they make the famous Golden Triangle tour in India.

The capital of India, Delhi 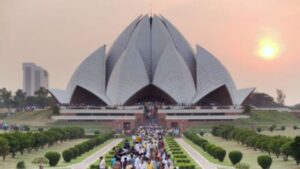 Delhi is a dream destination for every traveler. Its mystical presence makes it a favorite destination for both domestic and international tourists. Delhi has witnessed the rise and fall of many great empires, whose foreshortening is still present in its monuments and in the streets that have been traveled and inhabited by great warriors for decades.

Dotted with many mesmerizing architectures, Delhi is a dream destination for lovers of history and architecture. Its historical splendor is accompanied by modern facilities and the comfort of the most recent structures, means of transport and switching. This makes Delhi a destination worth visiting by all, regardless of age and interest. 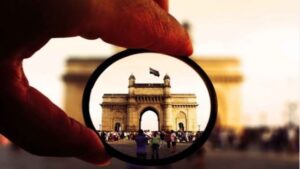 Mumbai, formerly known as Bombay, is the capital of Maharashtra and the largest city in India. Mumbai was initially the accumulation of seven islands on the coast of Konkan, which over time joined to form the city of the island of Bombay. He joined the Salsette islands in the neighborhood to form the Big Bombay.

Bombay takes its name from Bom Bahia, which means “beautiful bay”, given by a Portuguese. This was later popularized as the state of Bombay by the British. The current name of Bombay is Mumbai. Furthermore, many claims that Mumbai is its original name, which derives from “Mumba“, a local Hindu goddess “Mumbadevi” and “Aai”, which means “mother” in Marathi. However, his name was in the registers changed from Bombay to Mumbai in 1995.

Mumbai is undeniably the economic capital of India and one of the main port cities of the country. Mumbai has a different nature and multicultural lifestyle. On the one hand, this city is the birthplace of Bollywood and on the other. This city has the largest slum population in India. With the huge influx of migrants, this city welcomes everyone with open arms. The city has developed its identity from these communities that have established themselves here. The culture here is a beautiful fusion of festivals, religions, music, food, music, and theaters. Mumbai is said to have more active nightlife than other cities. 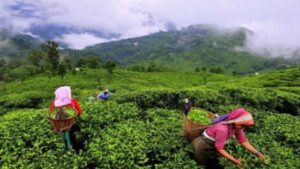 Munnar; a jewel in the mighty Western Ghats, a paradise in God’s Country, a real treasure for visitors, is one of the most beautiful and enchanting hill stations in the country. Adorned by the beauty of rolling hills, evergreen tea plantations, lush spice gardens, winding paths, and much more. Munnar is one of these destinations that will fulfill all your dreams and make your holidays extremely memorable. Whether it’s a family vacation, friends outings, corporate getaway, honeymoon, backpacking or any other journey,

Munnar always serves as an ideal escape for everyone. Record of captivating hills and mountains, gurgling rivers and cascading waterfalls, lush plantations, and protected wildlife areas. This hill station in Idukki district in Kerala is a tourist destination to visit for all. For all those who are planning a relaxing, enjoyable, and memorable vacation among the fascinating wonders of Mother Nature, they must plan a trip to this beautiful hill station. And to make their holiday in Munnar more enjoyable, here’s a detailed tourist guide to Munnar: 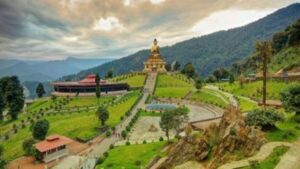 Sikkim is a state in northeastern India and the hill town of Gangtok is its capital. It has international borders on three sides … its northern border is with Tibet (which is now part of China), to the west with Nepal and to the east with Bhutan. Only the southern border is with India and that is with the state of West Bengal, to be more specific with the district of Darjeeling.

Almost all of Sikkim is located in hilly terrain surrounded by the Himalayan mountain range. The altitude across Sikkim varies widely and ranges from the lowest altitude of 280 m (920 feet) to the highest point of the Kanchenjunga peak which is on the border between Sikkim and Nepal and at an altitude of 8,586 m (28,169 feet ). The altitude of the capital Gangtok is 5,410 feet.