Best places to see in Oman

Best places to see in Oman, Effortless natural beauty, fascinating and well-preserved cultures and locals renowned for their generous hospitality – Oman may occupy the tip of the Arabian peninsular, but it’s really the heart and soul of the Middle East.
Much like the UAE, the Sultanate of Oman has developed rapidly thanks to its oil wealth. But Oman is far more humble than its northern neighbour. During your tour in Oman, you will witness one of the most robust heritage protection strategies in the Gulf has helped safeguard Omani and Bedouin cultures against the tides of change. Meanwhile, a long coastline and interior desert wrapped in spectacular mountains make Oman prime territory for outdoor adventures.

It’s tempting to lapse into superlatives when talking about Oman’s main mosque – it’s home to the world’s biggest chandelier and the second-largest hand-loomed Iranian carpet. But what I love most is the understated beauty of the vast marble courtyards, inscribed archways and ablution fountains, where worshippers perform cleansing rituals before entering the prayer halls. Named for Sultan Qaboos bin Said al Said, the modern-day leader of Oman, the mosque was completed in 2001 and welcomes non-Muslim visitors between the Sunrise and Dhuhr calls to prayer. Drop into the visitor centre for a glass of Omani coffee and to learn about Ibadism, the country’s dominant school of Islam. 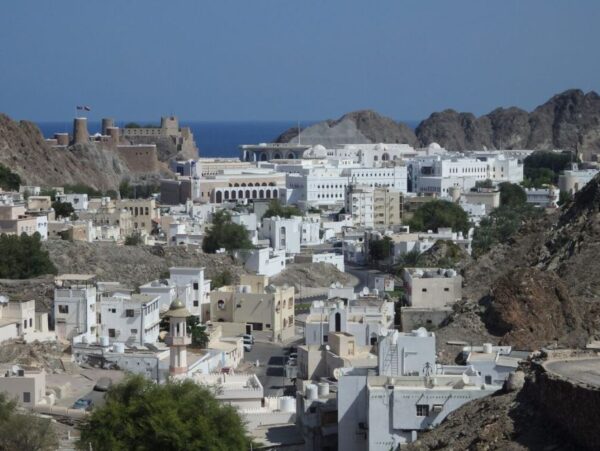 Twenty kilometres from downtown Muscat, Muttrah is one of the city’s most atmospheric neighbourhoods. The Corniche, a road and promenade cut into the coastal cliff, links the local fish market with the legendary Muttrah Souq. Known locally as Al Dhalam, ‘Darkness Bazaar’, the covered, windowless souq is believed to be one of the oldest marketplaces in the Arab world. Merchants trade in gemstones, Khanjar daggers and antique carpets, frankincense resin (Oman’s ubiquitous scent), henna powder, and embroidered kuma skullcaps. Don’t forget to look up – there are gorgeous stained-glass panels inlaid in the souq’s wooden roof. I recommend visiting Muttrah in the early evening, when Omani families hit the Corniche for a stroll.

Is there anything more quintessentially Middle Eastern than stumbling on a desert oasis? Wadis are deep, elongated canyons formed by rock erosion, often filled with quartz-blue water and fringed by palm trees. Some wadis are used to supply water to villages; others serve as all-natural waterparks. On the weekends, Omani families gather at wadis with picnic lunches while groups of teenage boys throw off their white dishdasha robes and go for a dip. Trek to the mouth of peaceful Wadi Shab before swimming between boulders to reach a ‘hidden cave’, replete with waterfall and rope swing. Oman’s best-known wadi, Wadi Bani Khalid, is a spectacular ravine that stretches through the Jebel akhdar mountains. Be sure to visit the nearby Muqil cave. Wadi Tiwi can also be explored on foot, stopping in at the wadi’s nine villages along the way, with a refreshing pool at the end as your reward.

The Sharqiya Sands, previously Wahiba Sands, was named after the Bani Wahiba – one of the nomadic Bedouin tribes that still wander Oman’s vast desert. The Shariqiya marks the eastern edge of the Rub’ al Khali, part of the Arabian Desert that stretches all the way to Saudi Arabia and Yemen. It’s just a short drive from the highway before you reach the ‘Empty Quarter’, with its rippled dunes and shifting peaks. The desert inspires a childlike joy – it’s almost impossible to resist the urge to kick off your shoes and go running and tumbling through the sand! Spend a night or two in one of Oman’s incredible desert camps for the unforgettable experience of waking up in the world’s largest uninterrupted sand desert.

Unlike a wadi that slowly reveals itself, the Bimmah Sinkhole appears out of nowhere. According to local legend, the cavernous hole was formed by a meteorite called Hawaiyat Najm, ‘The Falling Star’. The limestone rock collapsed in on itself, revealing a 20-metre-deep sinkhole with an aquamarine pool at the bottom (good news: it’s deep enough for bomb diving!). Located just off the road between Muscat and Sur, Bimmah Sinkhole is the ultimate pit stop when you’re road-tripping on a warm Omani day. 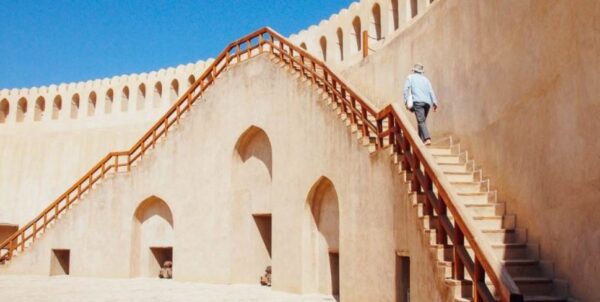 Oman’s craggy interior is peppered with historic castles and fortresses, each one a maze of turrets, false doors and ominous ‘murder holes’ – slits cut above doorways to pour scalding hot date oil onto unsuspecting intruders. Dating back to the 12th century, Nizwa Fort is the country’s most-visited national monument and historically served as the seat of the presiding Imams. It features a wonderful subterranean museum, and the adjoining souq – famous for its clay pottery – hosts a lively goat market every Friday. The nearby Jabrin Castle is unique for its round towers, luxurious carved doors and lattice work. Ar Rustaq Fort, erected on top of Persian ruins, and the 17th-century Nakha Fort are also worth a visit. 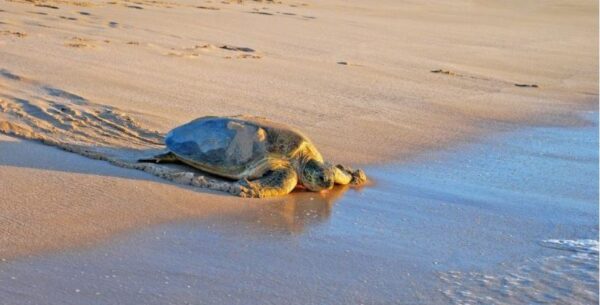 Five of the world’s seven species of sea turtle are known to nest along Oman’s 2,000-kilometre coastline. At the extreme eastern tip of the Arabian Peninsula, the beaches around Ras Al Jinz and Ras Al Hadd are among the only places on Earth where endangered green sea turtles nest 365 nights a year. The Ras Al Jinz Turtle Reserve was established in 1996 to protect the turtle habitat. Small, guided group tours out onto the sand depart nightly from the information centre. There’s no guarantee, but you’re likely to witness both hoards of turtle hatchlings racing towards the break, and hulking females depositing their clutches. 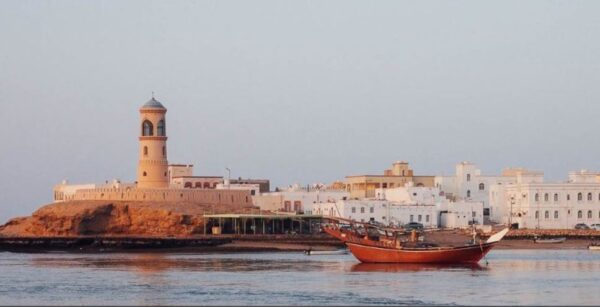 At its peak in the 19th century, the Omani Empire extended north to Pakistan and as far south as Tanzania and Mozambique. Oman’s colossal maritime power was centralised in Sur, a coastal city 200km from Muscat. (Some say Sur is the spiritual home of swashbuckling Sindbad the Sailor). Workers at Oman’s only surviving shipyard in Sur still turn out dhows. Incredibly, the hulking wooden boats are made by hand without nails by ‘sewing’ teak boards together with coconut-fibre cord. Wander down to the beach to see this feat of engineering for yourself, or climb the stairs of the Al Ayjah Watchtower for a birds-eye view of the dhows and Sur’s white houses. 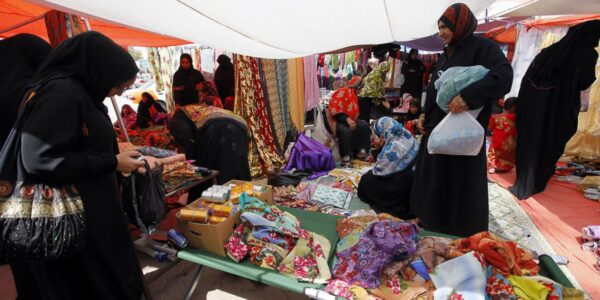 There’s a bit of a twist to the main market in Ibra, the second-largest city in Oman’s Ash Sharqiyah region. Wednesday mornings in Ibra have been declared ‘ladies only’. Women from surrounding towns and Bedouin settlements in the nearby Sharqiya Sands – many dressed in their distinct batoola face coverings – pour into town once a week to do a spot of shopping without their male counterparts in tow. Textiles, jewellery and beauty products take pride of place at the souq. There’s also a colourful fresh produce section. 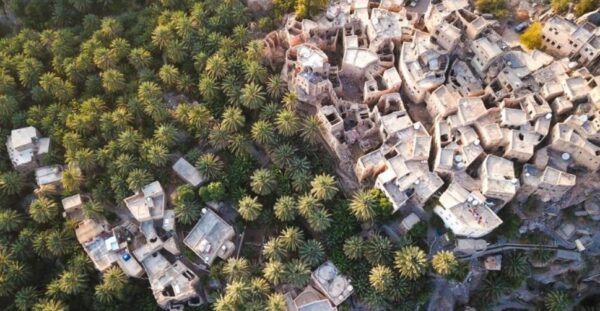 The idyllic village of Misfat Al Abyreen is set in the Jebel Shams mountains, roughly 1,000 metres above sea level. Its mud houses are built atop massive rocks, blending seamlessly into the landscape. As you wander through Misfat’s shaded passageways, you can poke your head into the old, crumbling houses to see their anatomy. Others are still occupied (spot the colourfully painted gates), and one has been converted into a guesthouse. A series of marked hiking trails lead you around the village, through groves of date palms, down to a wadi, and up the mountain for spectacular views.